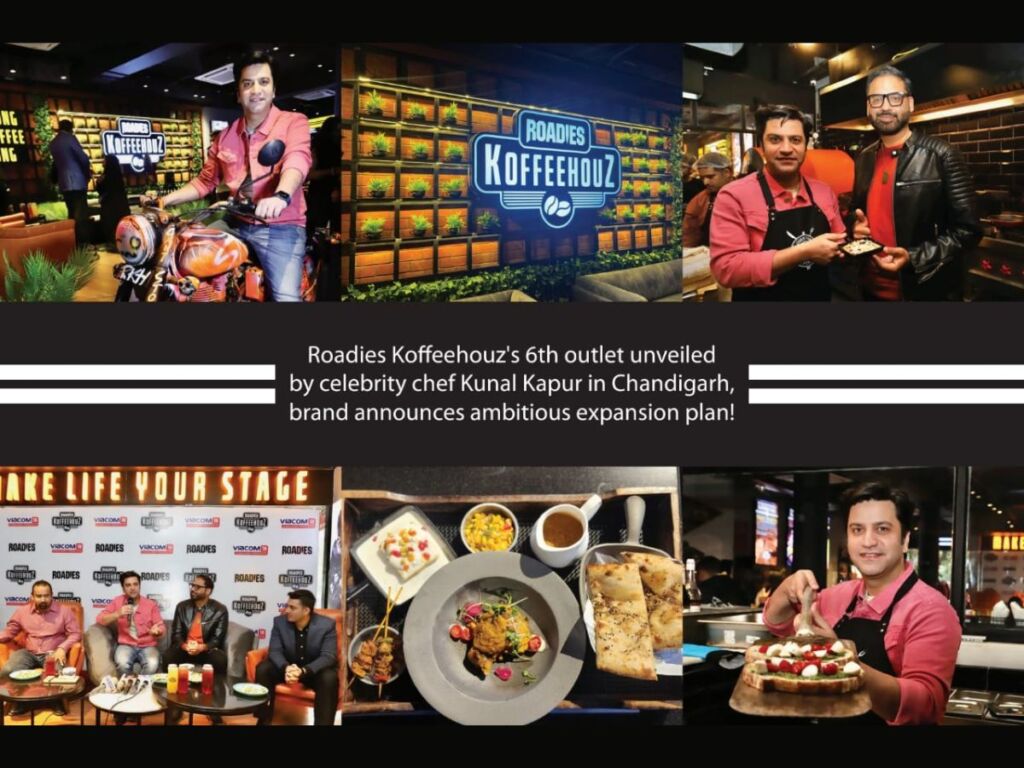 Chandigarh, December 16, 2022: Viacom18 Consumer Products, a part of India’s leading eponymous media and entertainment conglomerate, in collaboration with Leapster Restaurants Pvt. Ltd. continues to strengthen its pan-Indian franchise expansion. Contributing to this vision, the latest launch of Roadies Koffeehouz in Chandigarh’s Sector 7, Madhya Marg adds to the growing popularity of the franchise which has seen a successful streak of openings in Ludhiana and other sectors of Chandigarh. The newest establishment was launched by none other than food connoisseur and celebrity Chef Kunal Kapur.

In the backdrop of world-class ambience, Chef Kunal Kapur who is known as a MasterChef India judge as well as a successful restaurateur in his own right, prepared one of his well-known delicacies live in front of food aficionados, well-known personalities, and influencers.

Located in Madhya Marg, Sector 7 of Chandigarh, Roadies Koffeehouz – the official diner and café, is set to offer fans an unparalleled dining experience with great ambiance, beverages, and food. Uniquely designed with a Roadies feel in its interiors, the Roadies Koffeehouz  Sector 7 outlet is spread over a sprawling area of over 2500 square feet with a live stage for performances. Creating a one-of-its-kind experience, the diner and café will offer its patrons cold beverages served in special cans sealed in front of customers. Moreover, the café features a coffee blend, exclusively roasted for Roadies.

Sachin Puntambekar, Business Head, Consumer Products, Viacom18, said, “At Viacom18 Consumer Products, we invest in our consumers through memorable experiences. We have been rapidly expanding our Roadies Koffeehouz franchise, which has witnessed an overwhelming positive response. This has reinforced our ambition for our pan-India expansion plans which aim to offer consumers a truly personalized experiential format, that brings them closer to their favourite franchise.”

Sahil Baweja, Founder and CEO, Leapster Restaurants Pvt Ltd., the official licensee of the brand ‘Roadies’ for running and operating Roadies Koffeehouz outlets, said, “The dishes created by Chef Kunal Kapur will be added to not just the Roadies Koffeehouz-Sector 7 menu but also to the menus of all our existing Roadies Koffeehouzs’. We are grateful to our real patrons – our valued customers – who have shown immense love to our experiments with coffee and appreciated our focus on fresh cooked gourmet comfort food.”

He further said, “We already have six Roadies Koffeehouz outlets in Chandigarh and Punjab region. We have four more stores signed for Punjab. Another five in Gujarat are under construction and five have been signed.”

After catering to the taste buds of food lovers through outlets in Chandigarh’s famous Aroma Hotel Complex in Sector 22, Mohali, Patiala, and Ludhiana, the Roadies Koffeehouz brand is now spreading fast in other regions of India, added Baweja.

Ankit Gupta, Chief Business Development Officer (CBDO) and Founder, Leapster Restaurants Pvt Ltd., added, “We are expanding rapidly our 24 hours and 7 days open diner franchise model pan India. We are quite upbeat about the Gujarat market, with multiple outlets under construction in Ahmedabad and Surat. We have also finalized plans for entering UP’s Lucknow, Kanpur, Varanasi, Agra and Noida markets.”

Roadies Koffeehouz recently bagged the prestigious award of ‘Trendsetting Cafe Chain’ in Punjab. Sahil Baweja has also been adjudged ‘Innovative Restaurateur of the Year’. Both these recognitions were given at the prestigious ‘Hospitality Icon Awards’ at Chandigarh, which was organised by one of India’s largest media groups. The honour was bestowed on Sahil and the Roadies Koffeehouz team by celebrity actor Sargun Mehta.

Viacom18 Consumer Products and Leapster Restaurants Pvt. Ltd. will continue to collaborate on the multi-city, country-wide expansion of the Roadies Koffehouz franchise, with Gujarat and Uttar Pradesh in the near future.