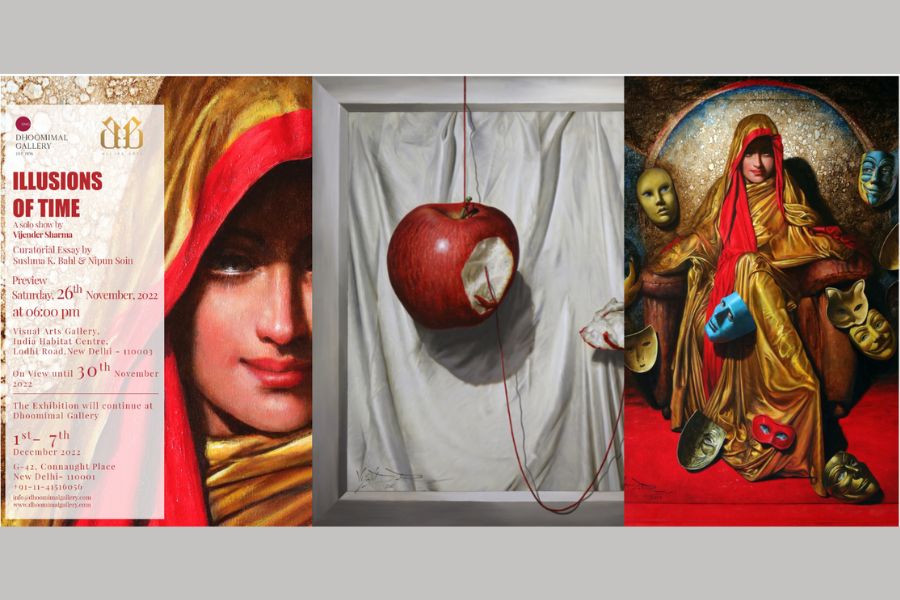 November 30: Dhoomimal Gallery in collaboration with Allure Art presents “ILLUSIONS OF TIME”, A solo show by Vijender Sharma. The curatorial essay for this show is written by Sushma K.Bahl & Nipun Soin. From 1st December till 7th Dec 2022 exhibited in Dhoomimal Gallery G -42 Block G, Connaught Place,New Delhi from 11am till 7pm

Key Notes on the show:

The focus in much of the artist’s repository is primarily on human life, people’s emotions and narratives connected to their life. Be this about Adam and Eve, the forbidden fruit, the umbilical cord, sperm and the cycle of life. There are protagonists who with their silent voices add an eerie aura around the compositions. The artist paints dreams. He features people of varied demeanor. His characters are thinkers nursing their hidden perspectives and relishing their secret lives. The paintings of beautiful damsels, their voluptuous bodies wrapped in cellophane cover or clothed in see-through layered costumes, their features drawn and painted in intricate details, offer surrealist studies of human portraits. The choreographed compositions with beautifully drawn eyes, hair, strings, masks and other objects spread around, present engaging dramatic play. The metaphysical painter creates surreal and magical canvases including some spiritual leaders, revered for their universal form, and not tied to a particular religion or region. Known for his super realistic forms, his collection features real life look-alike figures with masks, heart-shaped forms, petals and threads hanging or tied up as in ‘Love and Masks 1 & II’. Therealistic appearance of the characters is deceptive to the eye, in a vein similar to the Greek painter Zeuxis painting of grapes, that look so real that birds are tempted to peck at them!

The artist is also credited with a series of portraits including a tiny one-and-a-half feet portrait of ‘M.F. Husain’ in watercolours that he had painted when still in his final year at the art college. One needs to see it through a magnifying glass to appreciate its finesse and the minute details properly. “It is a good reminder of my days of struggle and keeps me grounded”, says Vijender who wishes to retain it for his own collection. Another “high point of my career has been the invitation received from the then President of India Abdul Kalam to make his portrait”. A memorable and exciting experience that he continues to cherish. Credited with bringing alive the late poet art critic Keshav Malik in a beautiful painting, he has also done portraits featuring Mother Teresa, Mahatma Gandhi, Buddha and Jesus Christ among others. His expertise in giving the revered figures his own positive and open-minded interpretation is reflected in his painting titled ‘Salvation’, which features Christ adorning a crown surrounded by symbols of love instead of thorns. The mask tied together and hanging from threads within the frame, seem to signify the need to avoid deception.

Vijender’s work engages with fantasies, real life encounters and mythical characters.Akin to the sheer veil, which covers his protagonists, the surrealist compositions depict human reality entailing mystery and fantasy as depicted in the two differently sized partly covered and oriented characters, one male and the other female, their eyes wide open accompanied by a variety of masks, and titled ‘The Red Mask’. There is also a cinematic realism in some of his paintings that stem from his work with Bollywood films and television serials as in ‘The Masks Player’ and ‘Lady with Masks’. Such paintings are markers of his versatility as an illustrator and illuminator.

There are other creations that mark his measured brushwork entailing details as in the stitched-up figure surrounded by calligraphic messaging in ‘Life is Life’.The painting titled ‘Big Bang’ presents the dilemma of the tied-up sperm or may be a soul. ‘Desire for Rebirth 1’ and ‘Desire for Rebirth II’ paintings rotate around the notion of cycle of life-death-rebirth. Offering a touching contrast appears ‘Desire 2013-II’ where the seed is trying to tear apart the cover and come out of the womb cutting through the blood red umbilical cords and the body itself. In contrast appear two different compositions both titled ‘The forbidden fruit’. Their graded palette of red and gray, with the figure appearing in one case, is symbolic of

Adam and Eve. The silvery sheath and the tempting looking red apple addan engraved metallic look to the imagery. It also exemplifies the artist’s mastery in handling colours, textures and forms. Also noteworthy is the contrast in the nude body’s background and foreground as painted in ‘Gold and Body’. The remarkable delicacy, depicted in the reclining nude figure, appears realistic as if you can touch or feel her emotions. “I like to focus on the anatomy and structure of the figure” asserts the artist who is fearless when working on the figure in his paintings. The ‘Social Listener’ some what lonesome and lost, his face covered with a mask, while many others stacked behind him, his hands tied up and eyes located elsewhere, makes an engaging art-scape. The composition titled ‘Stop’ with a bird sticking his neck out of the nested hole and several other pock-marked telltale signs of injury, decay and loss that cover not only the canvas but also beyond it onto the frame, make an evocative painting.

A search through the collection brings forth a range of visual stories in multiple sizes, styles, expressions and illusions. There are people, men and women sheathed in their see-through robes of transparent polythene that look hyper realistic. There are clowns and magicians who entertain the world. Insulated from the mundane life around, the happy go lucky looking clowns articulate telling tales with double-edged meaning as mirrored in their lonesome lives. One of the works in this series is part of the Bollywood star entertainer Amitabh Bacchant’s collection. There are also paintings featuring beautiful ladies. Others are highlighted with masks and petals lying within the composition and the frame that binds the picture together. His works also touch on the futility of hankering after worldly pleasures that are transient, leaving one with a feeling of emptiness once they evaporate. The paintings titled ‘Love Hate and Meditation’ and ‘The Life of Meditator’ come within this domain as they highlight the need for meditation. His most recent work is a twelve-piece composition ‘Realism to Abstraction’ which traces a journey and presents an interesting point in this contemporary artist’s track.

Vijender’s women including the lone someones hold their heads high, even when covered in clinging or see-through sheaths of cloth, or tied down by thin red cord that they seem to want to rip off, yearning for freedom from bonds that hold them back. The work also stands for the changing face of Indian women – no longer confined or wrapped up in a Ghunghat or veil as in the olden days. On the one hand it suggests her open and liberal worldview and on the other it is a satire on the way her form continues to be used and misused by the society and media even today. With flowers and petals, masks, strings and objects scattered around, the paintings in the collection represent the struggle between the positives and the negatives, a part of human life. There are hyper realistic and illusionistic compositions with a tinge of satire on contemporary double- edged life.

His work lays special emphasis on the sensuousness and beauty of the figure. The face is given a soft touch while the eyes; the eyebrows, hair and hands are painted meticulously. Measured brush strokes using hard and soft brushes help create a bright and vivid palette, with a play of light and shade. “I like to focus both on the inner emotions and outer appearance of my protagonists” claims the artist who has mastered the art of creating a different and third colour of his own design by mixing two or more of the readily available ones. His symbols are open to varied interpretations such as sperm like form may stand in for a womb, flowers for youth, and strings suggest confinement or links while masks signify society and games that people play.

Vijender paints for a living and does it exceedingly well for himself. Occasionally critiqued for the decorative elements in his work, it calls for a closer look and study of the themes that underline his sensuous oeuvre. In his scheme of creativity there is no time or interest for direct sermons via art. Rather than confrontation his art seeks resolution. A fascination with beauty is evident in the artist’s masterly handling of human form including female figuration. “Art for art’s sake is a prerequisite for it to impact the society”, asserts the artist who believes art must be visually enticing for it to engage the viewer. He lays emphasis on meditation, drawing, form, palette, texture, composition and experimentation rather than depending on mechanical or electronic devices for his work. For him the visual appeal in an artwork is essential for it to draw the viewer.

There is no wonder that an impeccable artist dips his brush in his soul and paints his own nature into his artworks. This statement by HW. Beecher rings true in case of our renowned artist who is here to mesmerize you with his style of work, the pride of India, none other than Vijender Sharma -a very few amid the Indian artists who can illustrate life on the canvas through his magical strokes.With a remarkable flair for art, he also has an incredible zeal to work and portray manifold subjects on the canvas. No wonder that is the reason he is constantly rising and shining in his life. The themes chosen by him are commonplace but powerful. Love, death, devoutness, corruption, pretense are some of his chosen subjects to work upon. The artist has, over time, gained insights about human relationships and an understanding of humans with his environs. He adheres to realist-naturalist mode of representation in his paintings with an efficacy towards administering the core idea in a way which is a treat to watch for the onlookers. His works are based on his life experiences. This is the key reason why we see his works interacting with the audiences and telling them a never heard before tale. His works have evolved over time, from depicting his art through traditional mediums including oil, acrylic and to using new methods including 3D installation of the modern-day. His style and works give a picture of the illusion of times, thus opening new avenues of endless exploration. Vijenderâsforte lies in the medium and nature of content he illustrates. With an inimitable style he presents a dreamlike landscape for his spectators to decipher. Vijender wants his audiences to feel the intensity and become a part of his lifelike works. One feels like holding the objects he paints in a three-dimensional structure. Vijender projects a photograph realistically onto the canvas. His attention to minute details makes his artworks an epitome of beauty entwined with mystery. The onlookers find his works thoughtful and dreamlike.The young illustrator makes parallel exhaustive probes into color, approaches it with stimulating fascination, grips and balances it with unerring mind’s eye.

Vijender Sharma is possibly one of the most brilliant exponents of the genre of photorealism in India. Excellence in this form demands an extremely high level of skill of both eye and hand, and a rigorous schooling. The significant thing, however, is not his great virtuosity but that thus transcends mere academism with a satirical world view which is very much his own.

Vijendra Draws his strength not from style but his handling of the medium and content – His language is simple but his manner of utterance only proves that it is simple to be simple. He must be judged on his own terms.

The post Dhoomimal Gallery in the collaboration with Allure Art presents “ILLUSIONS OF TIME “A solo show by Artist Vijender Sharma appeared first on City Lights.